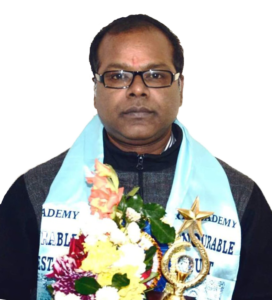 This is Mr. Somnath Biswas,

An artist from India.

Mr. Somnath Biswas was born in 1970, at Naihati, West Bengal, India. Somnath Biswas graduated in Visual Arts from the Indian College of Arts and Draftsmanship Kolkata, (Under Rabindra Bharati). In the past few years he won many prestigious awards (in a span of near about 25 years). He has held so many solo exhibitions, group exhibitions, workshops, training programs and participated in several prestigious art representations in the departmental (NVS) of human forms. He gradually moved from atmospheric scenery to the new human form and held many workshops on a traditional metal casting art work “Dokra”.

Somnath Biswas has emerged as one of most promising young painters of contemporary Indian Art. Though recognized as a water colourist the painter is equally easy at oil on canvas. He is an adorable as well as courageous Artist.

About the Artist life:

He has a degree in fine Arts from the Government Collage of Art and Craftsmanship, Kolkata. He currently lives in Berhampore, Murshidabad with official residence in Jawahar Navodaya Vidyalaya and he’s been working as an Art Teacher in Jawahar Navodaya Vidyalaya for so many years. As an Art Teacher he received appreciation and recognition from all around for his new introduced Art style especially for “Dokra Casting and Waste material project”. He gradually moved towards ancient Art form of Indian Traditional Art “Dokra casting” as well as acrylic on canvas with simple form of humans figure. His more recent paintings are bold and graphic, with a strong brush and colour work. Somnath’s talent as a painter lies in his ability to internalise the Indian culture and express it in a style which is delightfully refreshing. For Somnath life is a celebration like holi, where the festive is all about colour. He is also a “Romantic Painter” who paints not only from his mind but also from his heart. He has organised many art workshops in JNVs as well as other places. He has received many prestigious awards specially Navodaya National incentive award, Best Art Teacher award, Biplabi Sambad Darpan Award and many other awards from different organisations.

He has acted as a resource person along with his students for the workshop program in NCERT, New Delhi and many other places like JNV Bhatinda, Raigarh, Bokaro, Munger, Burdwan, Ranchi, Bankura etc.

He switched over to representing human form from scenes of the landscape. He is uniquely excellent at crystal clear water colour while concentrating on nature. His latest Art works are pictorial and bold. His creation includes togetherness, The Day Begins, Human forms etc. Not only he is excellent in water colour but also he is an expert on oil canvas dipped in flamboyant oil.